Energy flows and nutrients cycle. Carbon cycles through ecosystems in two general forms: as inorganic free carbon dioxide (CO2) and as fixed organic carbon compounds, especially carbohydrates like glucose, C6H12O6, or gases like methane, CH4. Further detail on the carbon cycle is given below: 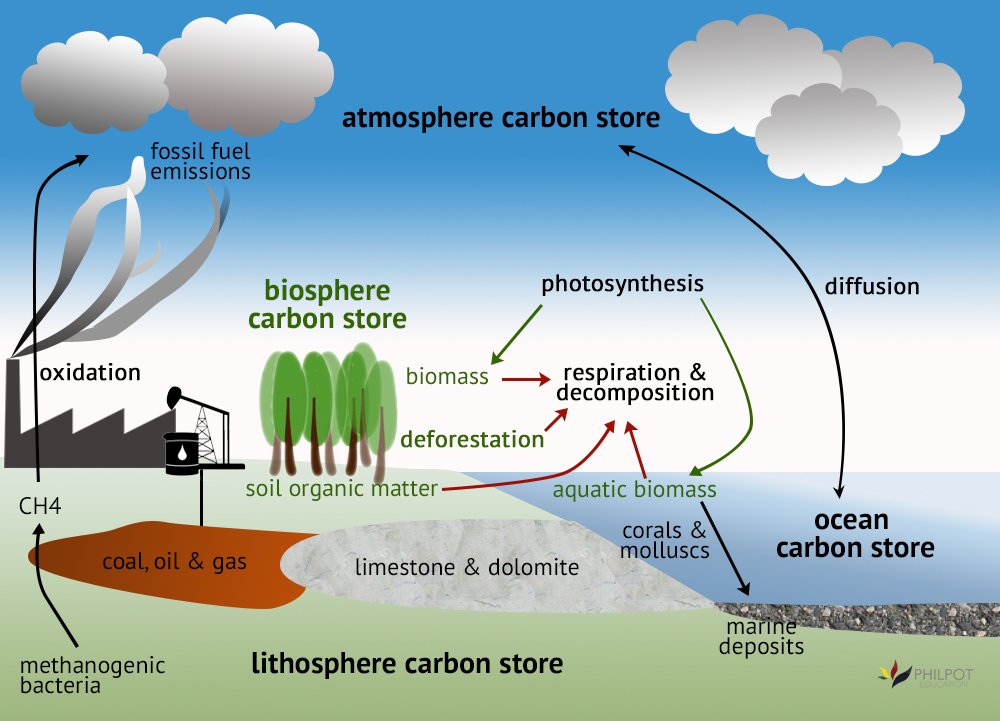 Figure 4.1.3a – Carbon cycle
A carbon store is so named because these are places where carbon accumulates and is stored, either long term (i.e. in the lithosphere), or short term (i.e. in biomass).

Major processes of the carbon cycle

1a: Annotate your diagram

1b: Skill - Practise drawing a simplified diagram of the carbon cycle

There are two types of process involved with the carbon cycle:

The amount of carbon that is transferred by different processes is called carbon flux.

Using information from Figure 4.1.3b:

Learn about cycling of two other important nutrients, and the vulnerability of agricultural soils in 14.1.6 Nitrogen and phosphorus cycles.

Figure 4.1.3c – Methanogenic archaeans have recently been found at Mount Everest base camp1
Scientists think that melting ice caps on Everest are to blame for uncovering this source of greenhouse gas. In this photo, you can see methane gas bubbles accumulating under the ice.

There are many more processes that put carbon dioxide into the atmosphere, like rising ocean temperatures, deforestation and increased weathering of limestone due to acid rain. You do not need to include them all in your drawing of the carbon cycle. The processes listed above are sufficient.

Figure 4.1.3d – Weathering limestone
This limestone has a distinctive weathering pattern. As limestone weathers naturally, it releases carbon dioxide into the atmosphere.

Biofuels are made with what have been traditionally food crops, such as maize and cane sugar. What are the ethical implications of diverting food crops for fuel? Are biofuels an ecological alternative to fossil fuels?

In order to understand the carbon cycle, making accurate, quantitative measurements of atmospheric greenhouse gases is very important for reliability of the evidence.