Populations grow according to two patterns:

Exponential growth occurs when resources are unlimited and conditions are ideal. In nature, this situation is rare, except in cases of alien, invasive species. The exponential growth curve has a characteristic J-shape.

Sigmoid growth occurs when resources are limited. Growth occurs in stages, which can be explained by relative rates of natality (N), mortality (M), immigration (I) and emigration (E). Populations grow rapidly and then stabilise at the carrying capacity of the environment. The sigmoid growth curve has a characteristic S-shape. 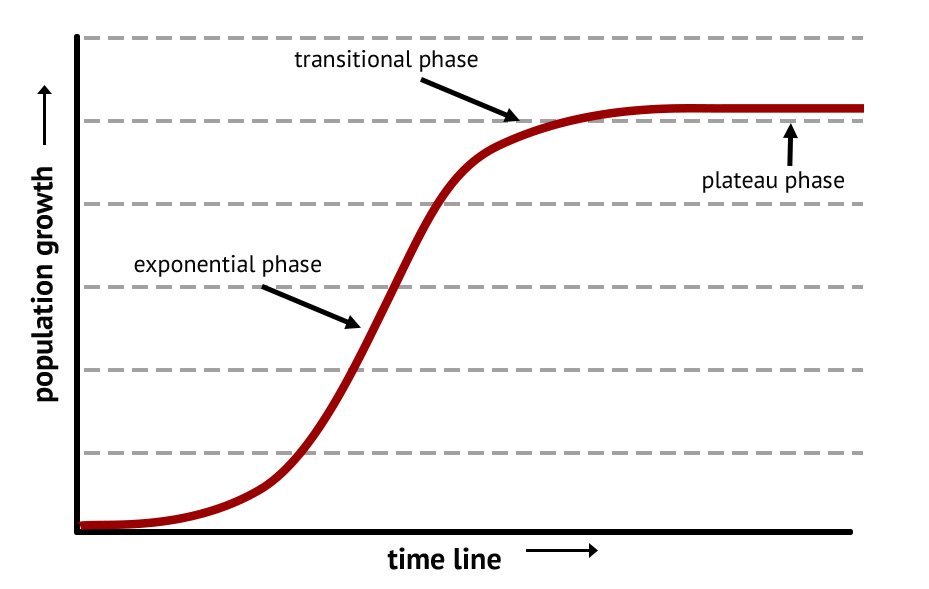 Sampling is necessary to estimate population sizes. Quadrats are a useful sampling method for plants, but they are not very useful for estimating populations of more mobile species. We can use a Lincoln index in these cases. This is also known as the capture-mark-release-recapture method.

Step 1: Use an appropriate capture technique to sample specimens in your test area. Mark them in a way that doesn’t harm them, and release them to the environment.

Step 2: Come back on a different day and capture specimens in the same test area. Count how many are marked and unmarked.

Step 3: Use the following formula, called the Lincoln index, to estimate the population size:

Top-down or bottom up?

Dynamic biological processes have an impact on population density and population growth.

Draw a sigmoid growth curve and annotate it by showing how rates of mortality, natality, emigration and immigration change at each stage.

In order to sample populations using a Lincoln index, you need to capture animals. How can you ensure ethical treatment of animals? How do you ensure the mark does not hinder the animal? For which organisms would these methods of capture be most appropriate?

Practise using the Lincoln index to estimate the number of sweets in a jar! Then check how the size of the sample improves the accuracy of your calculation.

Removing an organism from a food chain results in effects through all of the trophic levels. These effects are known collectively as ‘trophic cascades’. They can also be classified as either bottom up or top down. Removing a keystone species results in amplified trophic cascades.

Eutrophication means nutrient enrichment. Fertilisers used in agriculture enrich soils with nitrogen and phosphorus in order to increase productivity but they run off into lakes and rivers, where they encourage deadly algal blooms. When algae cover a body of water, they block sunlight, causing deaths in the ecosystem. How should fertilisers be used more responsibly to limit damage caused by eutrophication?